The Springfield Municipal Jail began accepting inmates January 29, 2010. The 100 bed facility is the largest municipal jail in the State of Oregon. The bond measure to build the facility was passed in November of 2004 by the citizens of Springfield.

The purpose of the Springfield Jail is to create a safer community and provide secure incarceration and detention for misdemeanant offenders, pre and post trial.

The goals of the jail for the City of Springfield are: 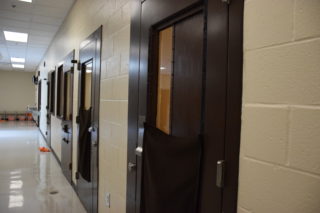 You may post bail 24 hours a day, 7 days a week. During regular business hours (M-F 8:00 a.m. – 4:30 p.m.), bail can be posted at the Springfield Municipal Court located on the second floor of the Springfield Justice Center, 230 4th Street. Springfield, Oregon.

You can post bail after hours at the Records Division of the Police Department, located on the first floor of the Springfield Justice Center.

The Prison Rape Elimination Act (PREA) establishes a zero-tolerance standard against sexual assaults and rapes of incarcerated persons. It is Public Law 108-79, signed in September 2003 by President Bush.

You can learn more about PREA at the Web sites for the National Institute of Corrections and the National Prison Rape Elimination Commission.

The Springfield Municipal Jail will comply with the provisions of the 2003 Prison Rape Elimination Act (PREA):
A zero tolerance policy toward all forms of sexual abuse/harassment; and
That if an incident of sexual abuse occurs in an agency facility and the abusers behavior has the potential to be determined as criminal, the investigation will be referred to the District Attorney’s Office for prosecution.